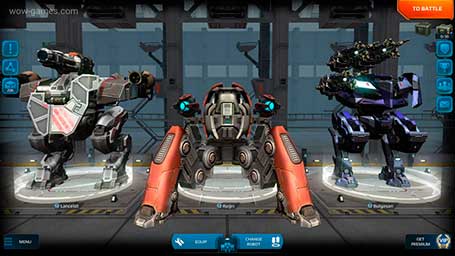 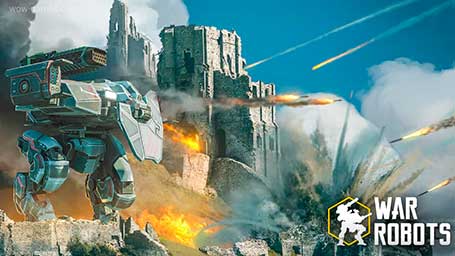 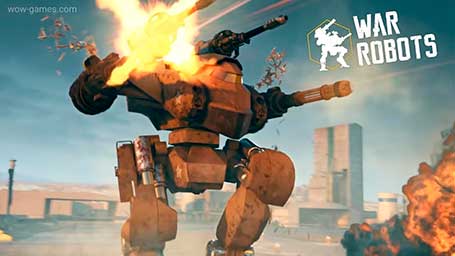 If you believe that you are a fight nerd, the best way to check it is by playing War Robots (if you have not done it yet). More than fifty million downloads can tell a lot about popularity of this game. It also means that more than 50 million users play War Robots. It will not make a problem to find the one to battle with or team up. It all minimizes the waiting time. You will be sent to the battlefield in something around twenty seconds!

The question is whether this game is really worth of your time. We hope that our review will provide a clear answer to you.

What is it all about?

We cannot say that there is something original or extraordinary about this game that makes it stand out from the rest of the genre. The idea of the developers was to mix the best playing elements and get a perfect formula for those who love online fighting. If you are in love with games like the World of Tanks, you will be satisfied with this release for sure. Also, this game would perfectly fit fans of MechWarriors Online. Just a few original twists – and War Robots Multiplayer Online is ready.

As for the specific features, 6v6 matches are available. The world consists of twelve maps. The major roles are the tank, the support, and the harasser. The freedom of choice impresses. The mission is to obliterate enemy mechas in the chosen location.

More than forty robots are available for every player. The developers keep on upgrading them and adding new characters with each update. It is possible to pick a module to improve the performance of your creature. Also, a player can pack any sort of weapon. You can create really powerful killing machines.

You’ll have to ravage through the infrastructure of your foes to win. You may team up with other players. The chances go up once you discover rare, premium artefacts in the game.

What Makes It So Cool?

The system requirements are very low, so no one should experience problems when downloading and installing War Robots Multiplayer on their devices. Even the outdated Android-based gadgets can cope with this 3D Deathmatch.

If you do not plan to play this game from mobile phone, do not even bother – it will run without any issues. The best part of the game is the so-called clan system. It is possible to join and have matches with your pals. Sure, a single-player mode is also available. In a solo match, you can deal with any robot you discover.

Playing in teams and against teams is, of course, much more fun. For example, you can team up with the maximum number of players, five, and make it six on six match with your opponents. You will have to develop and implement the fighting strategy together with your supporters. One can become a member of one of the clans and fight altogether with your new friends. A clan war is an impressive event in this game.

Watch out for the tournaments not to miss another one. Every successful match will bring you special points (extra credits). The stakes are usually high – you can exchange those points for valuable game goodies. One of the options is to match with another robots if you do not wish to exit the match where the luck is not your side.

Just like other apps of this genre, community is what makes War Robots so valuable and exciting. If you like the world, you may find War Robots lore. Each time the new robots appear in the game, you will at least have a clue of what they do and whether it is worth having one in your collection. The developers introduce new characters pretty often, so you will not get bored.

Unfortunately, we cannot skip this part as the cons of the game are obvious. Yeah, it is fun to play. However, if you plan standalone matches, you will not get that sort of excitement and feel for the fame. It is better to have fellows to play with.

The world includes 12 maps. They, however, do not seem to be inspired. They are standard and look pretty much alike. They allow for developing various tactics and strategies for open field, but they do not look rich.

The quality of graphics, as you may guess, is also low to medium. After all, this game does not weigh much. Almost every device can meet the system requirements and run this app. That is why it was expected that the graphics would suffer.

The worst part is, perhaps, the matchmaking system. Some of the dummies obtain gurus of War Robots as their first foes because of this awful system. The level and power of your rivals might be simply ignored. It will be boring for the cool guys to easily win all the time, while the weak opponents will not have so much fun dying every match. Players who constantly get outmatches report their problem, but the developers have not fixed it yet. Once you get tired because of this silly system, you may want to quit and uninstall the game from your device.

What else can make you frustrated? Sure, there is always a room for donating in the games of this genre. Without investing some real money, it will be difficult for you to win. The premium weapons and other items are the only way. The maximum amount of money that you may waste per time is $100, and we are not really sure whether it is worth your money. The issues associated with monetization in War Robots do not end here. Instead of matching players based on their artefacts, the system makes it based on the level and experience. Newbies may frequently face tough players that possess upgraded equipment in their arsenal. Those who boost for real money are obviously stronger than beginners and those who do not invest a cent in this game. Somehow, the game seems to be forcing to spend some money.

The low-quality visual content and monetization still do not cancel the fact that War Robots is fun to play. The community of the game significantly saves the situation. However, the monetizing system as well as how the opponents are chosen create a big gap.

The scheme is not free-to-play. You may have to waste plenty of money on constant upgrades and premium weapons. Solo matches do not make much sense; it is better to avoid the game if you have no one around who is eager to team up with you. If you have friends to cooperate with and willing to spend some money, War Robots can be a great option for you.